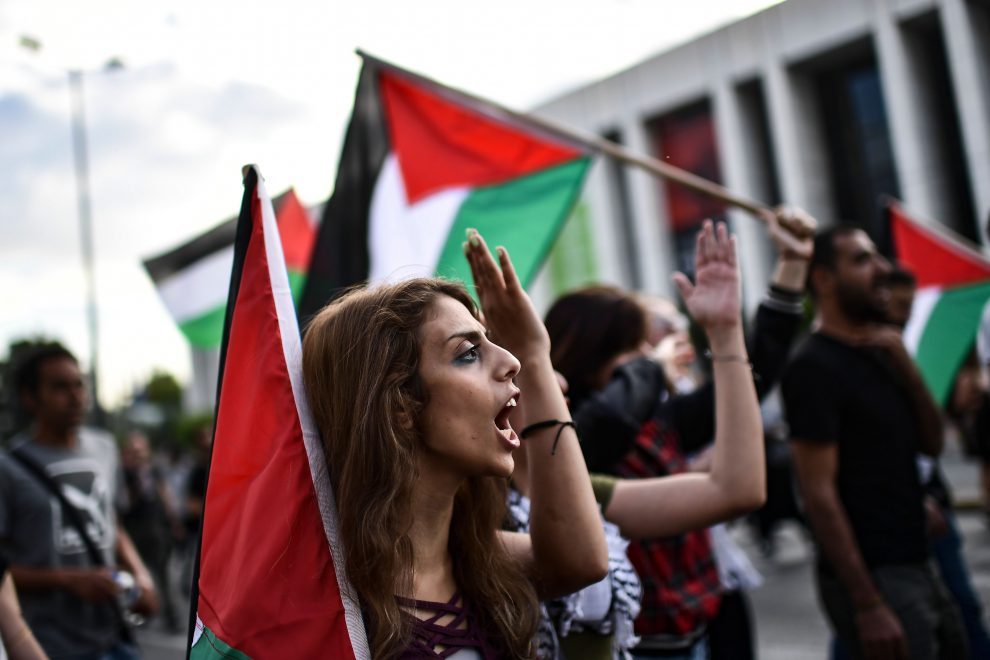 thanks to: il Fatto Quotidiano

Today is unfolding as a horrifying and tragic day in Palestine. The Israeli military has opened fire on Gaza protesters as the U.S. and Israeli governments prepare to mark the move of the U.S. embassy to Jerusalem. Today has been the deadliest day in Gaza since the end of Operation Protective Edge in 2014.

Since the beginning of the Great March of Return on March 30,105 Palestinians have been killed, over 3,000 protesters have been shot with live ammunition, and almost 13,000 injured.

We will be updating this post with updates throughout the day and have embedded our Twitter feed below that will most likely include the most up-to-date news.

Live video of the U.S. Embassy dedication ceremony in Jerusalem

Phil Weiss: ‘Gaza, Gaza’ is chant from Palestinians demonstrating near new US embassy

The demonstrations I just left near the new American embassy in Jerusalem were a dismal object lesson in Jewish sovereignty. The police beat up Palestinians merely for holding Palestinian flags and chanting that Palestine would be free. The police crumpled the flags, while women on an apartment balcony four floors up were spraying water on the Palestinian demonstrators.

Israel does not wish to escalate and doesn’t want the death of residents of the Gaza Strip. Those who want this are solely the leadership of the Hamas terrorist organization, which uses a cynical and malicious use of bloodshed. The number of killed doesn’t indicate anything – just as the number of Nazis who died in the world war doesn’t make Nazism something you can explain or understand.

Updated 18:55 GMT
South Africa has recalled its ambassador to Israel, Sisa Ngombane, “with immediate effect until further notice,” citing Israel’s use of lethal force against Palestinian protesters in Gaza today that killed at least 50.

A statement released by South Africa’s Department of International Relations and Corporation said,

“The South African government condemns in the strongest terms possible the latest act of violent aggression carried out by Israeli armed forces along the Gaza border, which has led to the deaths of over 40 civilians. The victims were taking part in a peaceful protest against the provocative inauguration of the U.S. embassy in Jerusalem.

This latest attack has resulted in scores of other Palestinian citizens reported injured, and the wanton destruction of property.

MSNBC’s Ayman Mohyeldin noticed the White House omitted a paragraph from their official transcript of Jared Kushner’s speech today where he condemned protesters in Gaza. The section the White House did not include is in bold below:

“President Trump was very clear that his decision and today’s celebration do not reflect a departure from our strong commitment to lasting peace. A peace that overcomes the conflicts of the past in order to give our children a brighter and more boundless future.

As we have seen from the protest of the last month and even today those provoking violence are part of the problem and not part of the solution. The United States is prepared to support a peace agreement in every way that we can. We believe that it is possible for both sides to gain more than they give so that all people can live in peace safe from danger, free from fear and able to pursue their dreams.

The United States recognizing the sensitivity surrounding Jerusalem, a city that means so much to so many. Jerusalem is a city unique in the history of civilization. No other place on earth can claim significance to three major religions.

Each day Jews pray at the Western Hall. Muslims bow in prayer at Al Asqa mosque, and Christians worship at the Church of the Holy Sepulchre. That is why President Trump has called many times, including right now, on all parties to maintain the status quo at Jerusalem’s Holy sites.”

Israeli Prime Minister Benjamin Netanyahu gave a speech this afternoon with strong religious overtones commemorating the opening of the U.S. embassy in Jerusalem.

“In Jerusalem, King David established our capital three thousand years ago,” Netanyahu said before citing biblical landmark events that took place in the ancient city. He added that relocating the embassy is a foundation for reaching a peace deal with the Palestinians, despite communication between Palestinian negotiators and the Trump administration abruptly halting last December when the moving the embassy was first announced,

“I want to thank Jared, Jason and David for your tireless efforts to advance peace, and for your tireless efforts to advance the truth. The truth and peace are interconnected. A peace that is built on lies will crash on the rocks of Middle Eastern reality. You can only build peace on truth, and the truth is that Jerusalem has been and will always be the capital of the Jewish people, the capital of the Jewish state.”

Netanyahu concluded his remarks by reciting the shehecheyanu, a Jewish prayer said when marking new or exceptional events.

President Donald Trump delivered a video message this afternoon celebrating the relocation of the U.S. embassy to Jerusalem, “the true capital of Israel.” Trump said the embassy opening today comes “many, many years ahead of schedule,” noting, “The United States remains fully committed to facilitating a lasting peace agreement and we continue to support the status quo at Jerusalem’s holy sites including at the Temple Mount also known as Haram al-Sharif.”

Palestinian President Mahmoud Abbas spoke to reporters in Ramallah today, announcing three days of mourning across the occupied Palestinian territory where schools will close and shops will shutter. In his speech, he described the U.S. embassy in Jerusalem as a “settlement” and said he would soon begin implementing decisions passed by the Palestinian legislature in a meeting earlier this month.

This morning in Washington DC, the Palestinian Ambassador Husam Zomlot released a statement calling the U.S.’s decision to relocate the embassy to Jerusalem an endorsement of “full-fledged apartheid,”

“Today will go down in history as the day the U.S. encouraged Israel to cross the line towards what numerous U.S. and international leaders have been warning from: A full-fledged apartheid. The reality has evolved into a system of privileging one group and continuing to deny the human and national rights, all granted by international law, of over 12 million Palestinians.”

This is a stunning statement from Gilad Erdan, the Israeli Minister of Public Security and Strategic Affairs.

Yossi Gurvitz: Here are the questions any journalist talking to the Israeli military should ask

Netanyahu dedicated about a third of his speech to welcome the White House officials by applauding President Trump for pulling out the Iran agreement:

“And to achieve peace, we have to do one other thing: We must confront the enemies of peace, and I thank President Trump for his decision to confront Iran rather than to appease it. Pulling out of the nuclear deal means that the world’s greater sponsor of terrorism, greatest sponsor of terrorism, is no longer on a glide-path to attaining an arsenal of nuclear weapons. This is good for Israel, this is good for the region, it’s good for the world.

Now, I have something to say to part of the world: With all due respect to those sitting in European capitals, we here in the capitals of the Middle East—in Jerusalem, in Riyadh and elsewhere—we’ve seen the disastrous consequences of the Iran deal. And so when President Trump decides to pull out of this deal, to walk away from it, we know that when he walks away from a bad deal, he’s doing a good thing for our region, for the United States and for the world.”

Netanyahu also spoke of the close personal relationship between his family and Jared Kushner’s:

“I’ve known Jared for 105 years, and there’s a special bond between our families, but I think the fact that you and Ivanka are here is a special, personal testament, but also a national and international statement. It is one that touches our hearts, and we are all delighted by your presence at any time, at any day, but especially on this day. Thank you.”

In addition to firing on Gaza protesters, Israel has also started bombing Gaza as well:

Sorgente: Live Blog: Massacre in Gaza as US and Israel celebrate embassy move to Jerusalem