France will be facing the Hague-based International Criminal Court (ICC) for alleged crimes against humanity over a series of nuclear tests it had been conducting in the South Pacific for some three decades.

A French Polynesian opposition leader said a complaint has already been filed to “hold all the living French presidents accountable for the nuclear tests against,” conducted against Polynesia – French oversees territory in the South Pacific.

“It’s with a great sense of duty and determination that we filed a complaint at the International Criminal Court on October 2 for crimes against humanity,” Oscar Temaru said at the United Nations.

“We owe it to all the people who died from the consequences of nuclear colonialism,” he added.

France carried out 193 out of 210 nuclear tests from 1960 to 1996 in Polynesia.  For decades, it had claimed that the explosions were controlled and clean and denied its responsibility for the health and environmental impacts of the testing.

Back in 2013, declassified documents of the defense ministry however revealed that extent of plutonium fall-out from the tests was kept hidden.

According to the documents, plutonium fallout hit the whole of French Polynesia, a much broader area than France had previously admitted.

French daily Le Parisien wrote at the time that the documents “lifted the lid on one of the biggest secrets of the French army.”

French Polynesia with a population of about 290,000 people is best known nowadays for its tourist island of Tahiti, which was exposed to 500 times the maximum accepted levels of radiation.

“We see French nuclear tests as no less than the direct result of colonization,” Temaru said, adding the testing was imposed upon the islanders “with the direct threat of imposing military rule if we refused.”

Temaru said France has “ignored and shown contempt” for repeated offers since 2013 to come to the table under supervision of the United Nations.

Marking the 52nd anniversary of the first of the weapons tests, the organization said in July that despite confessions from France it was working on compensation for victims of the weapons test, the process was not functioning as it should.

It said France has been considering only four cases this year, while 100 times more cases would have to be dealt with. 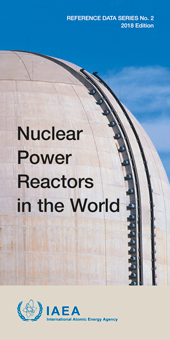 This is the 38th edition of Reference Data Series No. 2, which presents the most recent reactor data available to the IAEA. It contains summarized information as of the end of 2017 on power reactors operating, under construction and shut down as well as performance data on reactors operating in the IAEA Member States. The information is collected through designated national correspondents in the Member States and the data are used to maintain the IAEA’s Power Reactor Information System (PRIS).

Rice harvested in Japan’s Fukushima region, heavily affected by a nuclear meltdown in 2011, is returning to the EU, starting with Britain next month, the Japan Times reports.

Sorgente: Fukushima rice to be sold in Britain — RT Business

Amid escalating tensions on the Korean peninsula, a US nuclear submarine has docked in the port city of Busan, South Korea.

Having been a diplomat in Italy for 3 years I find it amazing to find a “neocon” in Italy.  Welcome to the club! Spike
I doubt that we will ever again, in our lifetimes, have a peace-time President.

•”A universal peace, it is to be feared, is in the catalogue of events, which will never exist but in the
imaginations of visionary philosophers, or in the breasts of benevolent
enthusiasts.” –James Madison
From: David Vincenzetti <d.vincenzetti@hackingteam.com>
To: list@hackingteam.it; flist@hackingteam.it
Sent: Wednesday, April 1, 2015 10:56 PM
Subject: To stop Iran’s bomb, bomb Iran

I COULD NOT agree more with John Bolton.
YES, if I were American (I am Italian) I would probably be a NEOCON.

[ MAY I SUGGEST YOU (yet again) a truly insightful — and undoubtedly MY FAVORITE — BOOK on IRAN’s HISTORY OF DECEPTION?  It’s a must-read to me.  The book: “The Rise of Nuclear Iran: How Tehran Defies the West”, by Dore Gold, available at Amazon ( http://www.amazon.com/The-Rise-Nuclear-Iran-Tehran/dp/1596985712 ) ]
[ EDITED TO ADD: A nice interview is available at http://www.aei.org/press/iran-backs-away-from-uranium-concession-ahead-of-deadline-bolton-on-fox-news-the-real-story/ ]

Enjoy the reading, have a great day!

WASHINGTON, Oct 17 2014 (IPS) – Western diplomats have reportedly faulted Iran in recent weeks for failing to provide the International Atomic Energy Agency with information on experiments on high explosives intended to produce a nuclear weapon, according to an intelligence document the IAEA is investigating.

But the document not only remains unverified but can only be linked to Iran by a far-fetched official account marked by a series of coincidences related to a foreign scientist that that are highly suspicious.

The original appearance of the document in early 2008, moreover, was not only conveniently timed to support Israel’s attack on a U.S. National Intelligence Estimate on Iran in December that was damaging to Israeli interests, but was leaked to the news media with a message that coincided with the current Israeli argument.

The IAEA has long touted the document, which came from an unidentified member state, as key evidence justifying suspicion that Iran has covered up past nuclear weapons work.

In its September 2008 report the IAEA said the document describes “experimentation in connection with symmetrical initiation of a hemispherical high explosive charge suitable for an implosion type nuclear device.”

But an official Iranian communication to the IAEA Secretariat challenged its authenticity, declaring, “There is no evidence or indication in this document regarding its linkage to Iran or its preparation by Iran.”

The IAEA has never responded to the Iranian communication.

The story of the high explosives document and related intelligence published in the November 2011 IAEA report raises more questions about the document than it answers.

The report said the document describes the experiments as being monitored with “large numbers of optical fiber cables” and cited intelligence that the experiments had been assisted by a foreign expert said to have worked in his home country’s nuclear weapons programme.

The individual to whom the report referred, Ukrainian scientist Vyacheslav Danilenko, was not a nuclear weapons expert, however, but a specialist on nanodiamond synthesis. Danilenko had lectured on that subject in Iran from 2000 to 2005 and had co-authored a professional paper on the use of fiber optic cables to monitor explosive shock waves in 1992, which was available online.

Those facts presented the opportunity for a foreign intelligence service to create a report on high explosives experiments that would suggest a link to nuclear weapons as well as to Danilenko.  Danilenko’s open-source publication could help convince the IAEA Safeguards Department of the authenticity of the document, which would otherwise have been missing.

Even more suspicious, soon after the appearance of the high explosives document, the same state that had turned it over to the IAEA claimed to have intelligence on a large cylinder at Parchin suitable for carrying out the high explosives experiments described in the document, according to the 2011 IAEA report.

And it identified Danilenko as the designer of the cylinder, again basing the claim on an open-source publication that included a sketch of a cylinder he had designed in 1999-2000.

The whole story thus depended on two very convenient intelligence finds within a very short time, both of which were linked to a single individual and his open source publications.

Furthermore, the cylinder Danilenko sketched and discussed in the publication was explicitly designed for nanodiamonds production, not for bomb-making experiments.

Robert Kelley, who was the chief of IAEA teams in Iraq, has observed that the IAEA account of the installation of the cylinder at a site in Parchin by March 2000 is implausible, since Danilenko was on record as saying he was still in the process of designing it in 2000.

And Kelley, an expert on nuclear weapons, has pointed out that the cylinder would have been unnecessary for “multipoint initiation” experiments. “We’ve been taken for a ride on this whole thing,” Kelley told IPS.

The document surfaced in early 2008, under circumstances pointing to an Israeli role. An article in the May 2008 issue of Jane’s International Defence Review, dated Mar. 14, 2008, referred to, “[d]ocuments shown exclusively to Jane’s” by a “source connected to a Western intelligence service”.

It said the documents showed that Iran had “actively pursued the development of a nuclear weapon system based on relatively advanced multipoint initiation (MPI) nuclear implosion detonation technology for some years….”

The article revealed the political agenda behind the leaking of the high explosives document. “The picture the papers paints,” he wrote, “starkly contradicts the US National Intelligence Estimate (NIE) released in December 2007, which said Tehran had frozen its military nuclear programme in 2003.”

That was the argument that Israeli officials and supporters in the United States had been making in the wake of the National Intelligence Estimate, which Israel was eager to discredit.

The IAEA first mentioned the high explosives document in an annex to its May 2008 report, shortly after the document had been leaked to Janes.

David Albright, the director of the Institute for Science and International Security, who enjoyed a close relationship with the IAEA Deputy Director Olli Heinonen, revealed in an interview with this writer in September 2008 that Heinonen had told him one document that he had obtained earlier that year had confirmed his trust in the earlier collection of intelligence documents. Albright said that document had “probably” come from Israel.

Former IAEA Director General Mohamed ElBaradei was very sceptical about all the purported Iranian documents shared with the IAEA by the United States. Referring to those documents, he writes in his 2011 memoirs, “No one knew if any of this was real.”

ElBaradei recalls that the IAEA received still more purported Iranian documents directly from Israel in summer 2009. The new documents included a two-page document in Farsi describing a four-year programme to produce a neutron initiator for a fission chain reaction.

Kelley has said that ElBaradei found the document lacking credibility, because it had no chain of custody, no identifiable source, and no official markings or anything else that could establish its authenticity—the same objections Iran has raised about the high explosives document.

Meanwhile, ElBaradei resisted pressure from the United States and its European allies in 2009 to publish a report on that and other documents – including the high explosive document — as an annex to an IAEA report. ElBaradei’s successor as director general, Yukia Amano, published the annex the anti-Iran coalition had wanted earlier in the November 2011 report.

Amano later told colleagues at the agency that he had no choice, because he promised the United States to do so as part of the agreement by Washington to support his bid for the job within the Board of Governors, according to a former IAEA official who asked not to be identified.

Gareth Porter is an independent investigative journalist and winner of the 2012 Gellhorn Prize for journalism. He is the author of the newly published Manufactured Crisis: The Untold Story of the Iran Nuclear Scare. He can be contacted at porter.gareth50@gmail.com