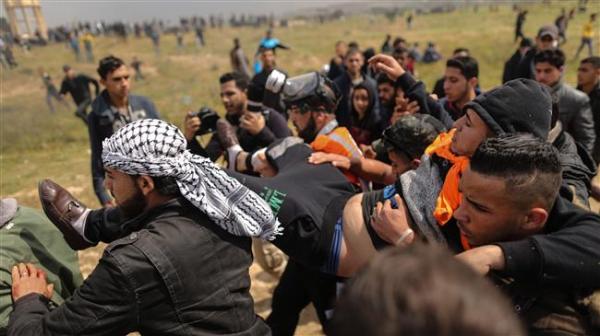 Palestinian medical officials say at least 15 Palestinians have lost their lives and more than a thousand others sustained injuries when Israeli military forces opened fire on thousands of protesters, who have flocked to a sit-in near the border fence between the Gaza Strip and occupied Palestinian territories.

Spokesman for the Gaza Ministry of Health, Ashraf al-Qidra, said three were fatally shot east of the southern Gaza Strip city of Khan Yunis, Jabalia, located 4 kilometers (2.5 miles) north of Gaza City as well as the border town of Rafah.

The fourth was Mohammed Abu Omar, 22, who was shot and killed east of Shuja’iyya neighborhood of Gaza City.

Al-Qidra added that nearly 1,500 protesters were also injured during the rally.

An Israeli drone was filmed firing several rounds of teargas on the protesters near the Gaza border. An AFP correspondent said several people were injured by the containers, which fell from a height of between 10 and 20 meters.

The Britain-based organization, in a post published on its official Twitter page on Friday, stated Israel’s policies of land theft exacerbate the sufferings of the Palestinian nation, and deprive them of their basic rights.

On this #LandDay, #Israel must stop policies of land confiscation & dispossession that inflict suffering on Palestinians, depriving them of their basic rights. This is a story of a Palestinian village, continuing its peaceful struggle against all odds → https://t.co/tKd0IcQVPP pic.twitter.com/puctSe4Fdi

We won’t concede ‘a single inch of Palestine’

Later in the day, Hamas political bureau chief Ismail Haniyeh arrived at the “return camps” along the eastern Gaza border and spoke to protesters.

In a statement broadcast on Palestinian television, Haniyeh said, “We welcome the Palestinian people everywhere, who have defeated the enemy leaders’ gamble that the old die and the young forget. Here are the young people, the grandparents and the grandchildren.”

“We will not concede a single inch of the land of Palestine and do not recognize the Israeli entity. We promise Trump and all those who stand by his business and his plot that we are not giving up on Jerusalem al-Quds, and there is no solution but for the right of return,” Haniyeh added.

The Palestinian rally, dubbed the “Great March of Return,” will last until May 15, which coincides with the 70th anniversary of Nakba Day (Day of Catastrophe) on which Israel was created.

Every year on May 15, Palestinians all over the world hold demonstrations to commemorate Nakba Day, which marks the anniversary of the forcible eviction of hundreds of thousands of Palestinians from their homeland by Israelis in 1948.

More than 760,000 Palestinians – now estimated to number nearly five million with their descendants – were driven out of their homes on May 14, 1948.

Since 1948, the Israeli regime has denied Palestinian refugees the right to return, despite United Nations resolutions and international law that upholds people’s right to return to their homelands.

Israel is required to withdraw from all the territories seized in the war under the United Nations Security Council Resolution 242, adopted months after the Six-Day War, in November 1967, but the Tel Aviv regime has been in non-compliance of that piece of international law ever since.